Over the last 20 years the private rented housing sector in the UK has become a much more important and a growing sector of the housing market.

Since de-regulation of the market: the abolition of rent controls by the introduction of the Assured Shorthold Tenancy in 1988 and the and the advent of the buy-to-let mortgage

The past 20 years have seen increased deregulation of the private rented sector, including the abolition of rent controls and reductions in statutory security of tenure. This was designed to encourage growth and reverse the significant decline in private rented stock during the post-war years.

The private rented sector has been seen by the government as providing an important bridge between social (council and housing association) rented housing and privately owned housing. The lack of accommodation to rent in the private sector is a problem as many households do not qualify for social housing, but they are also unable, or unwilling, to purchase their own property (students, young people, migrant-workers etc).

Deregulation has encouraged a large increase in the quantity of small-scale buy-to-let ownership. Indeed, the majority of privately rented accommodation is let by small-scale, often part-time or temporary landlords.

While this has been successful in creating a flexible and diverse market, it has also created problems. Lacking professional organisation, many landlords are unaware of their legal rights and obligations. As a consequence, some tenants are poorly served by their landlords, paying high prices for poor quality housing.

Many institutional investors have welcomed this, seeing it as a key factor in creating a more professional approach to renting, and thus encouraging large-scale investors (pension funds etc) to take investment in residential accommodation as seriously as in commercial property.

The entry of larger scale investors into the market would be welcomed by the government as this would promote a general increase in professionalism, standards and self-regulation.

According to government estimates approximately 12% of all households and 11% of housing stock are now in the private rented sector in England & Wales. Almost 2.5 million homes in England are rented from a private landlord.

There are estimated to be around 700,000 landlords in England & Wales, of which around 23% use a letting agent. Because more of the larger landlords use letting agents the proportion of lettings managed by agents is far greater than 23%.

The private rented sector has been growing but it is still relatively small compared to some other European countries. Private renting has advantages over owner-occupation for many people due to its flexibility and speed of access. It is a particularly important resource for younger households and for the jobs market.

Over the last century, the structure of home ownership in England and Wales has changed quite a lot.

Policies and economic developments have transformed the tenure structure over the century from a largely renting to an owner occupier population.

The last decade however has seen the first rise in the percentage of households renting, since 1918.

• In 1918 the majority, or 77%, of households in England and Wales rented, with the remaining in ownership.

• From 1953 ownership started to increase at a faster rate than in previous decades and by 1971 there was an equal percentage of households owning and renting.

• Within the rental sector policies following the World Wars impacted on the percentage of those socially renting. In 1918 just 1% of households socially rented and this reached a peak of 31% in 1981.

• Between 2001 and 2011, the number of households buying their homes through a mortgage fell by 749,000. Some factors that might have impacted on mortgage buyers are: high house prices, low wage growth and tighter lending requirements.

Home ownership falls for the first time since 1918

In 2011 the number of households in England and Wales stood at 23.4 million, an increase of 1.7 million from 2001. Of this number 64% were owner occupied – bought outright or through a mortgage, while the remaining 36% were rented. 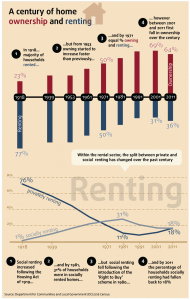